1. Geometry - I created a simplified version of the car using Solidworks and imported it into the geometry section of the Fluent workbench. Then, I drew the fluid domain as appropriate, using a plane of symmetry cutting the car in half. I made a 'negative' of the car by utilising the combine tool, and then deleted the two other entities to leave the fluid domain with the car cut out. I should note that I have made plinths on the wheels of the car, but I did not use the 'pull' tool to fillet them.

2. Mesh - I started by naming the sections of the rectangular fluid domain, with the front face as the inlet, rear as outlet, symmetry as symmetry, the roof and roof, the floor as floor and the wall next to the car as wall. I then hid these faces and named the car's body as car body, excluding the front and rear wheel which I named front and rear wheel separately. I then hid the wheels in addition to the car body and named the plinths as plinths together. I went for an element size of 0.1m, maximum size of 1.0m with a growth rate of 1.2 - resulting in around 7 million elements.

3. Set-up - I went for a K-omega SST model (at 15m/s should I use low Re corrections or Curvature correction?) changing none of the other settings/values. I assigned the fluid 'material' as air and the solid/car as aluminium.

Moving on to boundary conditions, I set the car body as a wall, the floor as a 'moving wall', translational at 15m/s in the -1 X-direction - as the X-axis is the symmetry axis and is pointing forward in relation to the nose, changing nothing else. The inlet as a 'velocity inlet' inputting 15m/s, changing nothing else. I left 'interior-fff solid' as interior. I assigned the outlet to be a 'pressure-outlet' - gauge pressure 0 leaving all else unchanged. I set the wall and roof as walls, selecting 'specified shear' and leaving the values as zero. I set the plinths as a 'wall' leaving all else unchanged. I set symmetry as 'symmetry' leaving all else unchanged. For the front wheel, I selected 'moving wall', 'rotational', inputting 15m/s as rad/s (~60.975rad/s) and detailing the origins of the front wheel in the X and Y axis - taking the coordinates from Solidworks and leaving the Z axis as 0 as this is the axis of rotation (perpendicular to the direction of travel) for which I assigned a rotational-axis direction of -1, as the Z-axis points from the body outward (I took a positive value as clockwise looking down the Z-axis arrow hence I needed anti-clockwise/negative). I repeated this process for the rear wheel.

Now going into 'Methods' - I changed 'Scheme' to SIMPLE, left 'Gradient' as 'Least Squares Cell Based', and changed 'Turbulent Kinetic Energy' and 'Specific Dissipation Rate' to 'Second Order Upwind'. Would it be a good idea to select 'High Order Term Relaxation', and what would the effect be?

Finally, in 'Initialization', I initialized the model using 'Hybrid Initialization', this completed successfully and I checked the mesh using the 'Quality' - 'Evaluate Mesh' selection in the 'Mesh' drop down ribbon at the top of the client. The minimum orthogonal quality came out as 1.50010e-01, which I believe isn't great. I set the 'Number of Iterations' to 1000, and exported a case and data file to upload to an ANSYS module through NoMachine to a supercomputer which outputs the output.dat file as running the simulation set-up.

4. Solution - after being notified that the simulation has been completed, I download the output.dat file from NoMachine and imported this into a standalone 'Results' system on my personal computer. I added a streamline plot starting at the inlet as standard, but the results shown were nonsense, and the pressure contour of a plane through the car shows constant pressure which is incorrect.

I have attached a screen shot of the streamlines, and tried to label the named selections for clarity; 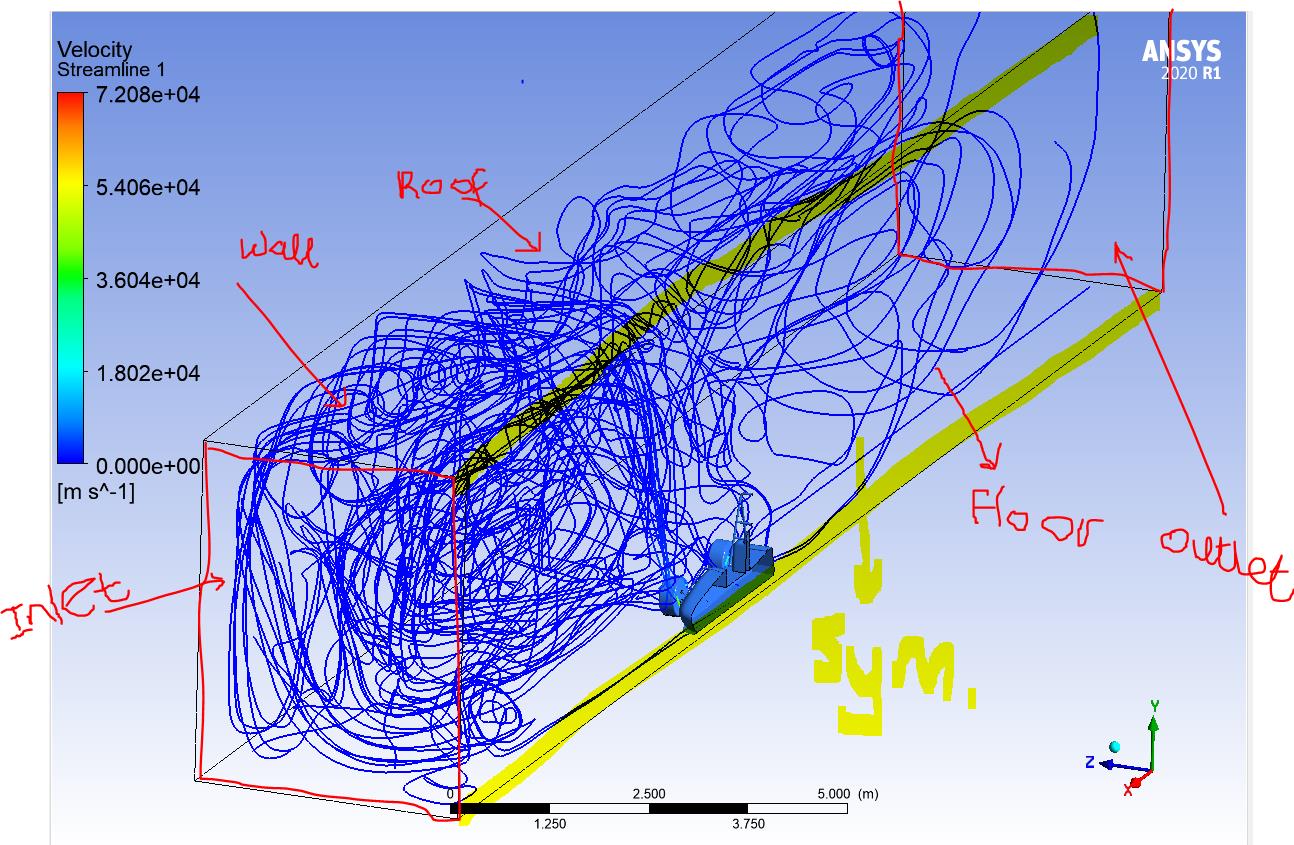 I recognise that this is a long and probably boring post - but any help or advice would be much appreciated as troubleshooting this with my experience would be incredibly time-consuming and waste of resources.