TL;DR: the viewfactor file0.vf gets over 30GB in size and it fills up my SSD. Error message:

An error has occurred writing to the file = 17 which may imply a full disk.

The system I/O error = 28. Please refer to your system documentation on I/O errors.

I'm studying the radiation in a cylindrical vessel (real size about Ø4mt, L6mt).

I've managed to isolate a 1/16th slice of the vessel with some elements inside and I'm trying to do a thermal radiation study between the elements.

I've setup a radiation problem (with internal heat generation of some elements and air convection inside for cooling), with surface-to-surface perfect enclosure radiation between the elements. The final mesh of the single slice is about 50k nodes, while the surfaces involved with the radiation have about 5000 nodes.

Once I start the simulation, it first takes about 10 minutes to calculate viewfactors using hemicube method. Once that's over, it goes smoothing and then it starts writing the data on the file0.vf file. At least that's what I've understood reading the Solution information file.This is my folder during the viewfactor write to disk: 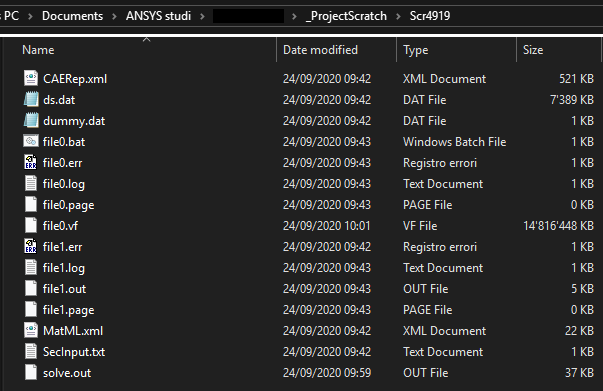 The problem is with the viewfactor file writing. This quickly starts filling up my SSD (all 30GB left) and stops when it has filled it completely. Then it interrupts the program with the above message.

Is it normal to have such a big viewfactor, or it's a bug of some kind? What's the expected viewfactor I can get for such a system?