Figure 1. GARS with auto- refinement gives the best fit possible for each output

Automatic refinement is available when you select at least one output parameter for refinement in the “Tolerances” table and specify a tolerance value for it. Once begun, the auto-refinement process handles design point failures and continues until one of the stopping criteria has been met (Figure 2). 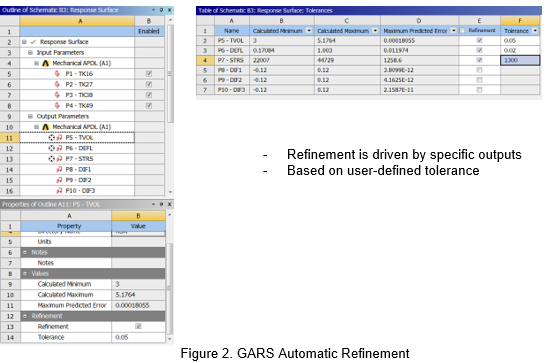 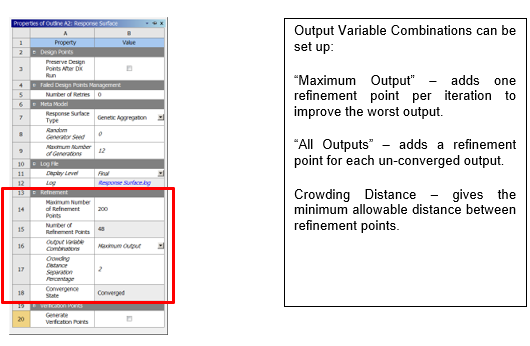 Each output parameter marked for auto-refinement is represented by a separate curve corresponding to this ratio, which is calculated for each output parameter to refine and at each iteration. Anything below the Convergence Threshold curve is in the convergence region, indicated by a shaded blue area on the chart. 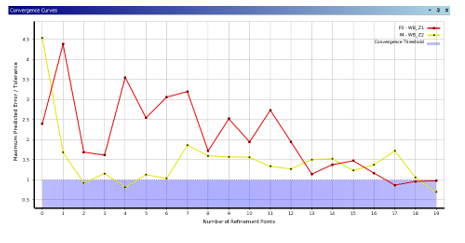 ANSYS DesignXplorer does include a variety of other response surface methods, and more can be added to our open platform via ACT. Each of these methods is advanced and it would take an expert user to understand them all fully. Fortunately, one does not need that level of understanding to use DX effectively.

Generally speaking, 2nd order polynomial RS algorithm can be used for simple cases (often mechanical analysis are simple enough), but always check goodness of fit. Kriging is a bit more advanced because it is flexible and self-adjusting with an automatic refinement feature, and it shouldn't be used for noisy data. Kriging would require to run verification points to get more realistic goodness of the fit. Non-parametric regression does a much better job of filtering out noisy data, but takes more design points to work well. Neural network is good for highly non-linear data, but is less accurate for most other situations. All of these (and other hidden methods and settings) are effectively replaced by the new Genetic Aggregation Response Surface Method (GARS) for most users.