Facetization problem : A way to merge faces without fill holes ?

I am a student in Master 2 in Biomedical Engineering at the University of Liège (ULiege Ansys customer number : 1047691) . I do my master thesis on the mechanical properties of TPMS scaffolds by performing simulations in Ansys (2019 R1). The scaffolds are .stl files. When I imported them in SpaceClaim and I convert it to a solid requesting the faces to be merged, I had some problems with facetization. With this I mean that in the flat regions where the faces were all supposed to be merged there remain some triangles. I have tried with two different meshers to create the .stl files (one from Netfabb and one from CGAL) and I had the facetization problem in both cases.

I used the option “Merge faces” in the “Repair” tab to try and repair it manually, but this tool works only for geometries without “holes” inside the faces I want to merge. For example, for a cube made of diamond TPMS, I had first facetization.

Then I used the tool “Merge faces”, and I obtain smooth faces. 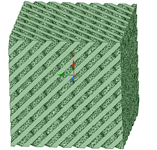 But for a cube made of a primitive TPMS, there are holes inside the faces that I want merge.

And thus the tool “Merge faces” fills the hole, which is not what I want!

Is there a way to merge the faces of one “circle” without filling the hole inside ?