Please use the Insert Image button to put the image into the post as well as attaching the image files because ANSYS staff are not permitted to open attachments. 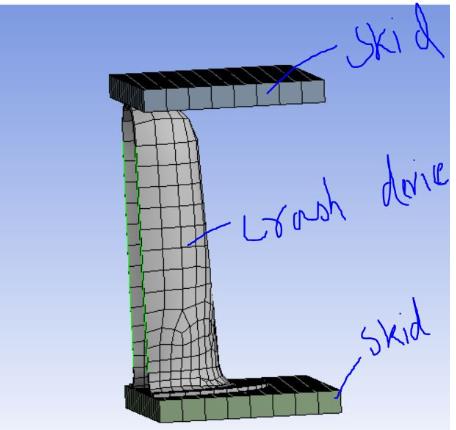 If you have a mass hanging from a thread, suspended 80 mm above a surface and you cut the thread, gravity will accelerate the mass. The velocity of the mass when it reaches the surface will be sqrt[2*g*h] or 1.25 m/s.

A helicopter is not generally in free fall, but it is reasonable to set an impact velocity limit for the device and your numbers suggest that limit is 1.25 m/s.

Most helicopters I have seen have two parallel skids, one on each side, so you are suggesting that this crash device is on each side of the helicopter.

Helicopters can take on a whole range of orientations while landing and it is reasonable to expect that it would touch-down on one end of one skid first. That first contact point then creates a reaction force that causes the helicopter to rotate about that first point until either the rest of that skid touches or to rotate about a different axis until the other skid touches and finally the two skids are on the landing pad. Therefore, another specification is the angle of tilt of the helicopter relative to the landing pad. Let's assume that the pilot will have the skid level within 200 mm, so over 3 m that means an angle of about 4 degrees.

It looks like you have used shell elements to mesh this geometry, which is a good way to go.

Start with a simple model, and add more detail as each simple model solves and gives you some information.

You should use a Transient Structural model.  Bring this geometry into SpaceClaim. Duplicate the crash device and make a parallel copy for the other side of the helicopter, maybe 2 m away to represent the width of the helicopter. Create a component called Pad. In that component, draw a rectangular surface that is a bit larger than 3 m x 2 m and is tangent to the bottom rail. Use the Move Tool on that component/surface. Reposition the triad of the Move tool to the vertex at the front outer corner of one bottom skid. Now rotate the surface 3 degrees about X and 3 degrees about Z (assuming Y is up). That is the landing pad and the first contact point.

Assign a Point Mass to the Remote Point. That is your 4000 kg. Later you could add some moments of inertia.

Create a Coordinate system called Ynorm and align the Y axis with the normal of the Pad surface. You can do that with Hit Point Normal.

Make the Pad a Rigid Surface. Create a Fixed Joint to hold that Pad surface to Ground.

Create Frictional Contact between the Pad surface and the two bottom skids. The Pad surface must be on the Target side because it is rigid. Set the Pinball Radius to 0.5 m so that the contact on the other skid is included. Insert a Contact Tool under the Connections folder and check that the contact status is Closed.

Add an Acceleration Load of -9.8 m/s^2 in the Y coordinate using the Coordinate System Ynorm. This is gravity pulling the helicopter to the Pad.

You might need more than 1 s to see both skids land on the ground.  You might find the peak stress is in the first 0.1 s and there is no need to simulate the full landing.

You will probably get some convergence problems along the way. You can reduce the contact Normal Stiffness to help that to converge.