Your original model had the displacement of the cylindrical body onto the flat wood sample defined by selecting all faces of the body. That has the effect of turning the body into rigid body. There won't be any stress or deformation of that body, though I note that it was defined with plasticity.

I continued that practice into the recent models. If you want the center pusher to deform at its tip where it makes contact with the block, you must pick the top flat face instead of the cylindrical face that is currently picked.  That does then expose another set of elements from failing to converge, so you might want to stick with the rigid body effect for a while until you have the flat wood block behaving the way you want.

The model is now at the point where element deformation errors are stopping convergence. 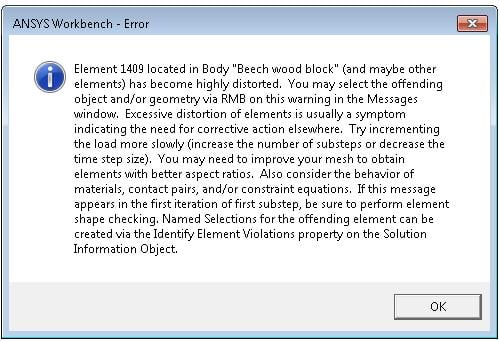 I have created a Named Selection called Element ID to find this element. 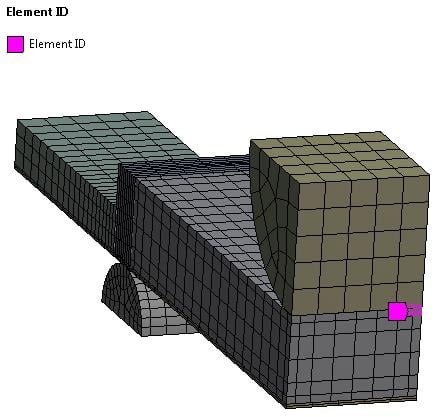 If you zoom into that corner of the wooden block, you can see that the Poisson's ratio is causing the wood to expand laterally, and the wood is starting to "fall off" the sharp edge of the cylindrical pusher.  This is going to cause the block element to deform and convergence to fail.  The corrective action is to make the pusher wider than the block so that the wood block doesn't fall off the pusher.  That assumes the pusher is much harder than the block (or rigid) otherwise, the same problem may show up on the pusher. 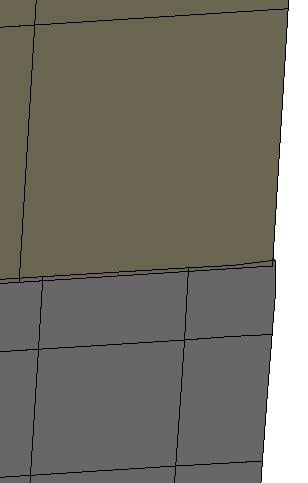 Actually, the element is on the symmetry side, but this model is missing some faces in the Symmetry Region, so once that is fixed, the problem will just show up on the other side.

At this point, you might consider a 2D plane strain model, since you can get some useful information in much less time and trouble.